While the federal government has not yet acted in reauthorizing a transportation law, there is no shortage of innovative suggestions for making the next bill truly transformative. In a new policy brief on this subject, the Brookings Institution's Robert Puentes advocates for the federal government to reauthorize existing federal surface transportation law for a two year period, setting the stage for a new six-year bill in 2013. Puentes argues that we need a short-term reauthorization, which he calls "SAFETEA-TWO," to keep infrastructure investments moving forward in this difficult economic climate. The paper also calls for several other reforms that can be implemented in the short term. Of significant interest is a call to "leverage metropolitan strengths through smart, targeted partnerships." This would provide more direct and flexible funding to regions that are already "taxing themselves." While Puentes predominately mentions some recent efforts in the western U.S., metropolitan Chicago is no stranger to raising its own revenues for transportation. As GO TO 2040 points out, well over 50 percent of our transportation dollars already come from "regionally-generated" taxes and user fees. These revenue sources include the RTA sales tax for transit, passenger fares, toll revenue on the Illinois Tollway system, and a range of other county and municipal revenue sources that flow toward operating and maintaining our system. 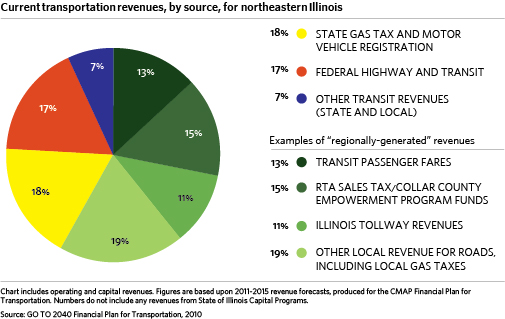