The rising cost of construction and operations, coupled with inflation, has significantly undercut the purchasing power of federal and state motor fuel tax receipts. Even so, many states have not responded to the growing need for additional revenues to support maintenance of the transportation system. Illinois is among 14 states that have not increased their gas tax in the last 20 years, according to a new report from the nonprofit, non-partisan Institute on Taxation and Economic Policy (ITEP) entitled Building a Better Gas Tax: How to Fix One of State Government's Least Sustainable Revenue Sources. The report is the first of its kind to examine the impacts of every state's gas tax rates. While the cost of maintaining roads has risen over time, the average state has not increased its gas tax rate in over a decade and the average state's rate has effectively fallen by 6.8 cents per gallon (20 percent) when adjusting for construction cost growth, according to the report. In Illinois, the gas tax rate has weakened by 15 percent since 1990 when adjusted to consider transportation construction cost growth. The state would need to raise the gas tax rate 6.5 cents to return it to its 1990 level, according to ITEP analysis. Currently, the State of Illinois gas tax has a rate of 19 cents per gallon, plus an additional 2.5 cents per gallon for diesel.

The report recommends that states increase and restructure gas tax rates so that they automatically rise with growth in transportation costs. The report also recommends "creating or enhancing targeted tax credits for low income families to offset the impact of gas tax reform." A press release, executive summary with key findings, and full report are all available on-line.

GO TO 2040 recommends bolstering both the state and federal gas taxes to bring a halt to the continuing declines in their purchasing power. The plan recommends that Illinois increase the gas tax by 8 cents and index it to keep pace with inflation. At the same time, alternatives to traditional financing mechanisms must be explored now to prepare for vehicles' becoming more fuel-efficient over time. 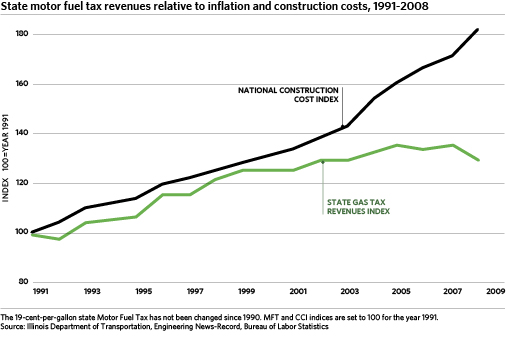