GO TO 2040 recommends a set of policies to promote quality of life and economic prosperity across our region, including planning comprehensively for transportation and land use. This Policy Update examines development trends and land use changes in the metropolitan Chicago region. A previous Policy Update analyzed the location and type of industrial development in the  same area.

Prior CMAP analysis found that distribution space is the fastest growing industrial building type in our region, which is in line with national trends. In addition, industrial development in the CMAP region has occurred historically near the region's transportation assets, including rail, water, highway, and airport infrastructure. This Policy Update describes how industrial buildings in the Chicago region have historically been larger than the national average and many peer regions, and how national trends affecting the function and size of distribution buildings have continued the trend of larger-than-average industrial buildings. While the region has recovered from the economic recession at a slightly slower pace than the nation overall, data indicates that the region's industrial development remains robust and is continuing to grow.

The changing design and function of industrial buildings

A mix of factors is leading to changes in industrial development nationally and regionally. Changes in retailing, intermodal shipment of goods, and supply chain management have led to evolution in the function and design of distribution and warehouse spaces. E-commerce accounted for over $83 billion of retail sales in 2015, and many businesses are incorporating online components to remain competitive. Retailers, manufacturers, and logistical firms require more space to handle the larger volumes of smaller shipments being made at increased speed. As a result, larger distribution and warehouse buildings with high ceilings, more mezzanine floors, and additional truck bays are required to accommodate the large number of different products. These trends drive the development of more distribution space, rather than more retail square footage. Between 2000-13, intermodal shipments -- containerized cargo transported via multiple modes such as rail, truck, air, and water -- have experienced a 28-percent increase in the Chicago Bureau of Economic Analysis (BEA) region, contributing to the increase in distribution properties at facilities that connect multiple transportation modes.

Anecdotal evidence indicates that growth in U.S. manufacturing output may also be contributing to the increase in industrial real estate. However, this growth does not appear to have significantly affected the type of industrial buildings being developed to support the region's manufacturing industry. 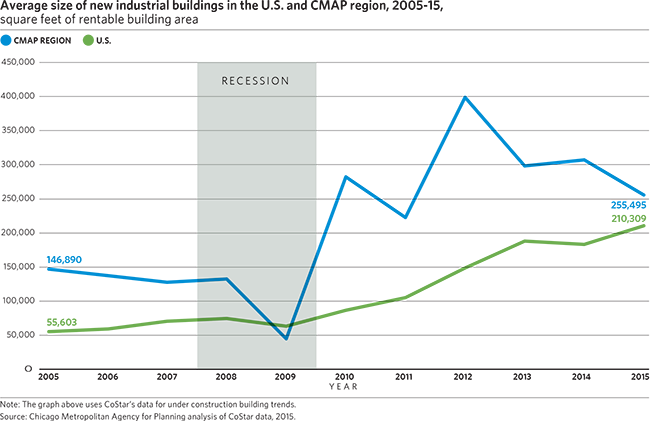 The average size of industrial buildings in the CMAP region has historically been greater than the national average. The larger size may be attributed to the region's traditional status as a manufacturing and freight hub. Driven by the building format needs of the retailing and intermodal trends outlined above, the average square footage of the region's existing stock of distribution buildings has increased at three to 10 times the rate of other growing building types. Large warehouse buildings are also being quickly developed in the region, but the large existing stock makes up the preponderance of the region's industrial stock, and average building sizes therefore respond slowly to near-term trends. 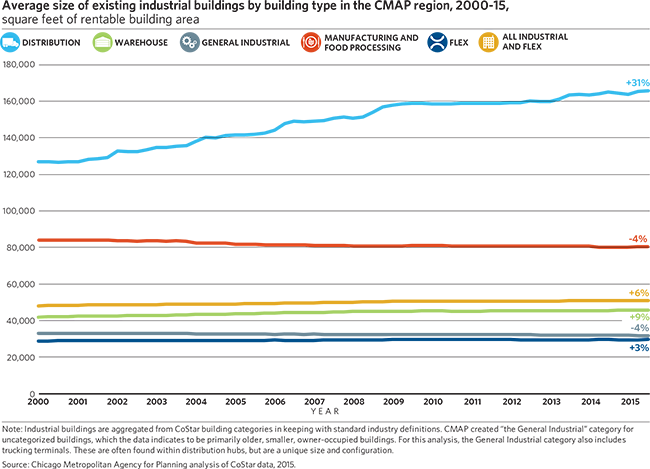 As described above, a mix of factors is leading to increased industrial development nationally and regionally. Since 2005, the existing industrial rentable building area (RBA) in the CMAP region grew by almost 3 percent. Compared to other non-residential building types, national and regional industrial development has performed better coming out of the recession. At 7.8 percent, the region's industrial vacancy rate, or the amount of existing RBA that is unoccupied, is at its lowest since 2001; this is also less than the region's retail and office vacancy rates. But the region's industrial vacancy rate is slightly above the national average. As described above, the Chicago region's industrial buildings are larger than national averages. That is also true of peer regions. This may be due to our traditional specializations in freight and manufacturing as well as associated high concentration of distribution and warehousing in the region. 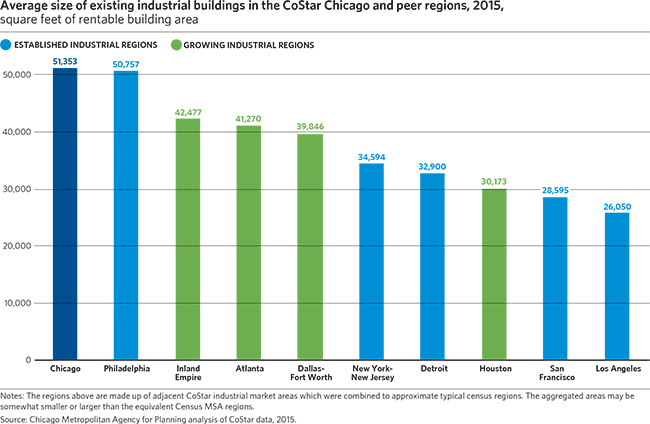 Industrial development in the CMAP region is closely aligned with national trends. As seen in the figure below, however, the region has had a slower pace of development than the national average since the end of the recession. This slower rate may be due to a variety of reasons, such as slowing regional population growth, a large existing stock of warehouse and distribution buildings, or a slower employment recovery in comparison to the country as a whole. In addition, the increase in intermodal freight volumes has occurred nationwide. These facilities are often accompanied by large distribution and warehouse buildings. Because metropolitan Chicago already possesses a large stock of distribution spaces capable of serving intermodal activities as well as the changing needs of retail distribution, the region may have a smaller growth rate of industrial development than other regions with a shorter history of intermodal and distribution activity. As in our region, national industrial vacancy rates are currently at their lowest in over a decade. 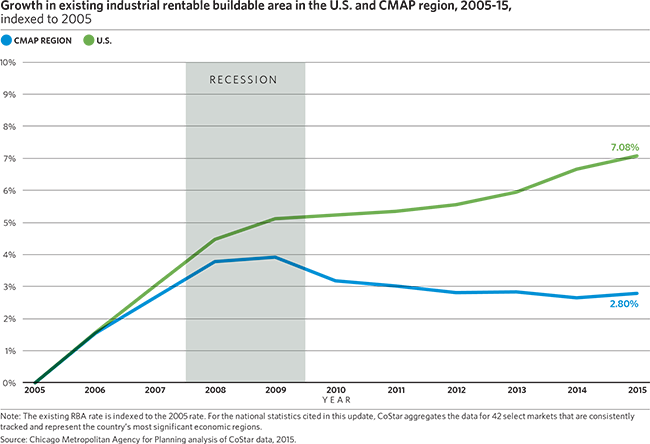 To compare the Chicago region to its peers, CMAP aggregated CoStar markets to approximate typical census metropolitan statistical area (MSA) regions. These CMAP aggregated CoStar markets often exceed the boundaries of typical census regions -- CoStar's Chicago industrial market extends to Rockford in Illinois, Kenosha in Wisconsin, and parts of northwestern Indiana. These CMAP aggregated CoStar regions were selected for comparison because they are the ten largest U.S. regions in terms of most industrial rentable building area. Combined, these 10 regions make up over 40 percent of the country's industrial square footage and represent most of the Chicago region's peers in terms of freight and manufacturing.

As seen in the figure below, CoStar's Chicago industrial market makes up 5.4 percent of the nation's total industrial RBA among the 141 industrial markets tracked by CoStar. Vacancy rates in the Chicago CoStar region are in line with older, established peer regions. Los Angeles and the adjacent Inland Empire, which serves as a secondary goods movement and industrial development location for the greater Los Angeles region, are an exception to this, likely due to the fact that the Port of Los Angeles is the busiest container port in the U.S.

Growing regions can have lower industrial vacancy rates for multiple reasons, including high market demand and a higher proportion of newer buildings that meet current market standards.  Compared to growing regions, established regions -- defined in this analysis as those with a median year of housing built of 1970 or earlier -- have a larger stock of older industrial property that may not meet the space, design, or function needs of firms. CMAP's O'Hare subregional freight-manufacturing drilldown report indicated that areas of the region with strong transportation access, proximity to a skilled workforce, and other assets succeed in generating higher occupancies and redevelopment despite a stock of older, potentially obsolete buildings. However, many other areas of the region lacking the aforementioned assets face larger challenges in redeveloping older buildings that do not meet current industry needs. In some cases, these buildings transition to other uses, while redevelopment or significant rehabilitation is required in others. 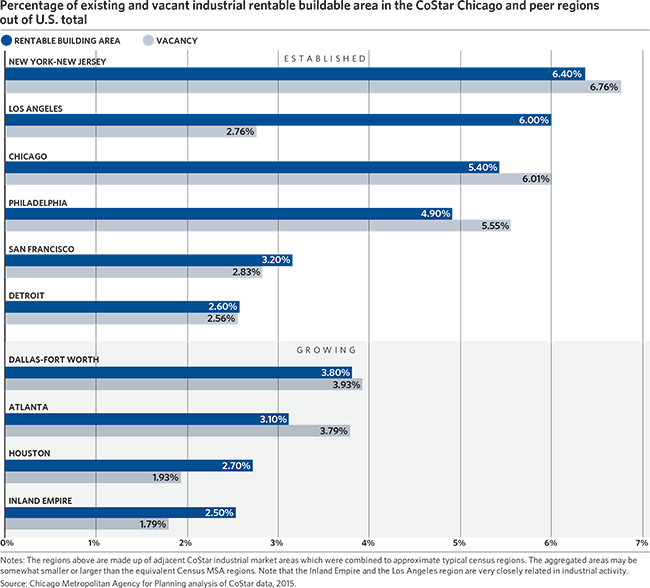 The first industrial development Policy Update  in this series found the majority of recently developed industrial properties are at the edges of the region. This can occur for many reasons, including a lower land purchase price, ease of development on a greenfield site, local regulatory conditions, access to key transportation infrastructure, and/or location in an area with less traffic congestion. In this case, the current trend toward high-square-footage distribution facilities to serve retail shipping and intermodal facilities may also be driving development farther out to larger, available development sites. In many cases, this may necessitate new or expanded infrastructure to serve these facilities.  GO TO 2040 supports targeted expansion of the region's built environment and infill growth that leverages existing infrastructure, is located near existing workforce, and reduces commute times.  CMAP research has also highlighted the need to preserve industrial land along key existing freight and manufacturing corridors to preserve access to the transportation assets required by the region's core industries.

Municipalities are the key implementers of land use decisions and can undertake a number of activities to assist industrial development. These activities can take multiple forms, including to streamline regulatory processes, to change zoning to allow continuation and enhancement of industrial activities, and to develop of initiatives that assist with remediation of brownfields and/or provision of supporting road, water, and other utility infrastructure. Planning for industrial land uses can also require careful balancing of the positive impacts like economic opportunity for residents and stable tax base, with possible negative outcomes like noise and truck traffic. Through its Local Technical Assistance program, CMAP helps communities to develop comprehensive plans, industrial area plans, zoning codes, and other work that can help communities plan for preserving, improving, and continuing to develop the region's industrial stock.