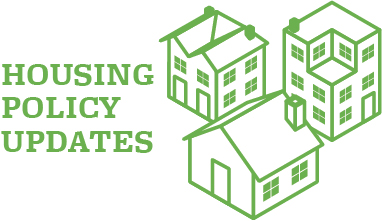 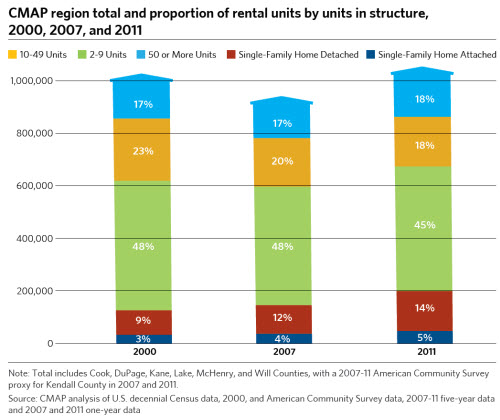 The region's decline in small multifamily building rental units may be due to currently vacant units, the continuing impact of foreclosures, demolition of these smaller buildings, or conversion to for-sale housing during the housing boom. A 2010 analysis of multifamily foreclosures in Chicago found that in 2009 alone, newly foreclosed multifamily properties contained nearly 20,000 rental units, with an average of three units per building. In many of these cases, tenants were evicted during the foreclosure process, leading to an increase in vacant rental units in small buildings and a loss of affordable rental options. Both the 2010 analysis and the Woodstock Institute's 2009 report Roadblock to Recovery found that these foreclosures were concentrated in minority and low-income communities. Additionally, once vacant, these properties were found to be more likely to deteriorate to a condition that made their rehabilitation cost-prohibitive. There are also many roadblocks to obtaining loans for the purchase and renovation of these small rental buildings, particularly the two- to-four unit buildings that house 30 percent of the region's renters.

Development of New Multifamily Rental Buildings
Multifamily rental units under construction in the region have increased, following the trend of increasing multifamily building permits in 2012. While 2012 saw completion of few new rental units, a historically high number of units are under construction in the region. Reis, Inc. therefore projects that more new multifamily rental units in large buildings will be completed during 2013 and 2014 than any year since the company began collecting such data in 1990. 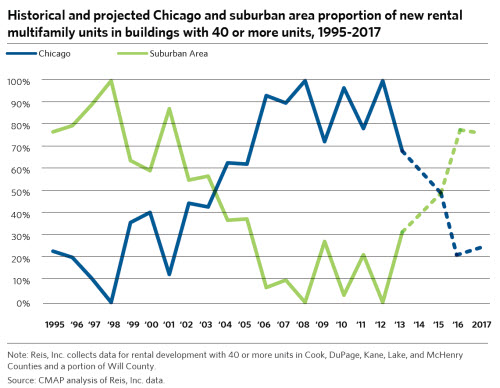 Looking Forward
There have traditionally been many impediments to construction of multifamily rental developments in suburban areas. In the many communities that do not have zoning to allow development of rental buildings, developers must undertake long and costly approval processes when seeking to build rental housing. Additionally, many residents fear negative impacts from rental developments. While GO TO 2040 does not seek to increase density for its own sake, the plan does highlight adding density, particularly near transit assets, as one strategy to create livable communities. The addition of rental housing in areas served by transit is one method to add density and provide housing for residents at all stages of life. This diversity of housing options can help to create more vibrant, livable communities. Adding more housing options can help residents to live near where they work, reducing travel and congestion in the region. CMAP assists communities in planning for their future housing needs through the Homes for a Changing Region program.