Prior to the recession, new single-family development occurred on the region's outer edges and new multifamily permits were concentrated in the City of Chicago. Overall, the number of permitted new residential units in metropolitan Chicago continues to recover from recessionary lows, and the number of single-family permits within already-established areas grew during and immediately following the recession.  However, with the exception of 2012, development of multifamily housing has been increasingly concentrated in Chicago. This effectively limits housing choice for suburban residents. GO TO 2040 recommends providing a balanced supply of housing types throughout the region, offering housing choice for the region's residents at all stages of life. This Housing Policy Update examines residential building permit trends in metropolitan Chicago through the third quarter of 2013. This analysis focuses on building permit data provided by the U.S. Census. Data is available for single-family structures -- including townhomes -- and for multifamily buildings with two or more units. However, the building permit data does not provide information regarding whether these units are for rent or for sale. Instead, this Housing Policy Update focuses on where new single-family and multifamily development is occurring in the region. For more information on tenure patterns, see prior Updates on single-family tenure changes and rental multifamily housing development trends.

Total Residential Permits on the Rise 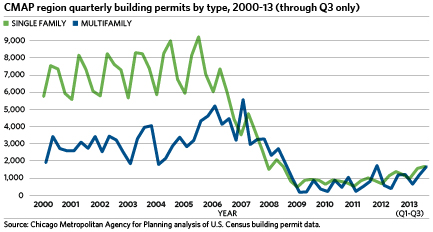 Multifamily Permits Shift Back to Chicago 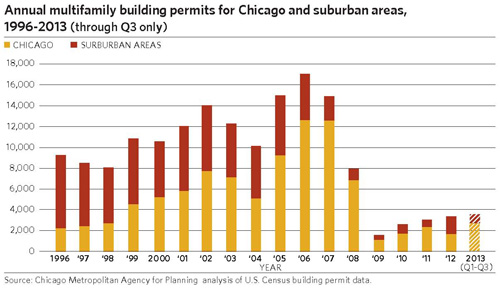 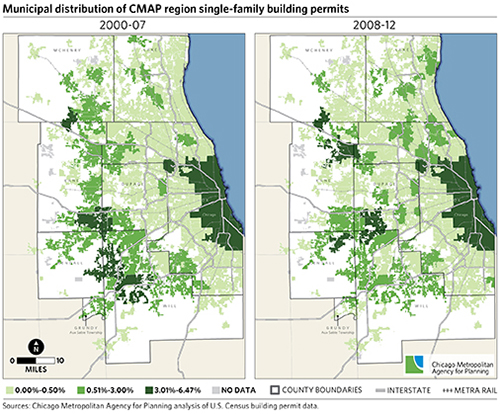 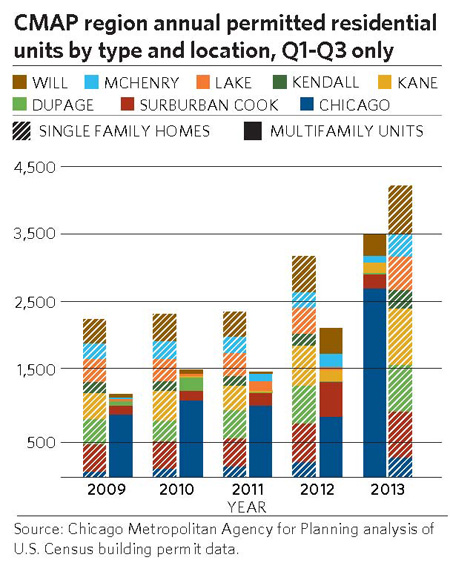 Local governments play an important role in implementing the livability principles of GO TO 2040, particularly with regard to creating local land use ordinances and approving new development that supports livable communities. GO TO 2040 recommends that municipalities encourage development that provides housing choice for the region's residents. A balanced supply of housing types and owner- and renter-occupied housing is critical to the success of the region. Housing choice can support a more economically viable region by promoting better access to jobs, reducing commute times and congestion, and providing access to key services and amenities.

Multifamily development, whether for sale or for rent, is an important component of providing housing options. However, with the exception of 2012, the regional trend has been increasingly tilted toward development of multifamily residential units primarily within the City of Chicago. This can effectively limit housing choice for the suburban residents. Although this development pattern is driven in part by market considerations, municipalities can encourage multifamily development by revising land use ordinances and policies that might currently limit the potential for multifamily development.

GO TO 2040 recognizes that the region's diverse community types are a strength and does not recommend increasing density for its own sake. Instead, the plan recommends that municipalities plan for livability by pursuing opportunities for more compact, walkable, and mixed-use development and by providing a range of housing options. Livability can often be supported by denser, mixed-use development. Local interpretations of livability principles should consider community character when determining appropriate densities, types of mixed-use development, specific methods for affordable housing provision, and so on.

Finally, CMAP supports communities in planning for housing through the Homes for a Changing Region program. This process enables municipal leaders to chart future demand and supply trends for housing in their communities and to develop long-term housing policy plans that help create a balanced mix of housing, serve current and future populations, and enhance livability.