Update: The study was completed in December 2013.

In 2011, Chicago Housing Authority (CHA) applied to LTA program to undertake a transportation study to support the proposed redevelopment of the former LeClaire Courts public housing project into a mixed-income LEED-ND community. The redevelopment of the site is part of CHA's Plan for Transformation.  LeClaire Courts development is located along Cicero Avenue, just south of Stevenson Expressway (I-55), and about a mile from the Midway airport. CMAP retained URS Corporation to lead a team of consultants in undertaking the transportation study, which is examining transit access and walkability of the site to ensure that its redevelopment takes advantage of nearby transportation opportunities and integrates them in a supportive way. The study is meant to provide guidance to CHA on the feasibility of transportation improvements that would improve access to the site and to gauge the potential for commercial development along Cicero Avenue that LeClaire Courts borders. The study also provides general guidance for how the site development can maximize access to the surrounding transportation systems as well as internal accessibility. SB Friedman was retained as part of the consulting team to conduct a market analysis that assessed the market potential for commercial development along Cicero Avenue corridor to provide CHA with guidance on the types of commercial development that might be most successful. The study involves coordination with different stakeholders including Metra, RTA, CTA, CDOT, and  the City of Chicago Department of Housing and Economic Development.  The CHA intends to seek LEED-ND certification for the redevelopment of LeClaire Courts. 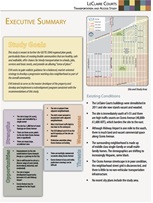 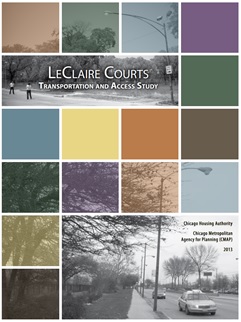