This Policy Update reviews air cargo trends in the Chicago metropolitan area, compares this performance to peer metropolitan regions, and describes ongoing initiatives to expand the region's primary air cargo facilities.  It is the first in a series of three Policy Updates examining regional trends for air, water, and rail freight.  Readers may also want to see previous Policy Updates, such as "Leveraging the Region's Freight Assets and Addressing its Challenges," "Overview of Freight Flows into and out of the Chicago Region," and "Intermodalism -- Metropolitan Chicago's Built in Economic Advantage."

Metropolitan Chicago's economic success is in many ways linked to its unparalleled access to freight networks across air, water, rail, and road modes.  While air cargo makes up just a small percentage of the region's freight by volume, it carries high-value goods and provides direct access to international markets.  As such, the ability to handle large volumes of air cargo is an important component of the strong freight network that gives our region a competitive advantage in the movement of goods.  The volume of air cargo moving through the region has recently hit record levels, outpacing the growth seen in peer metropolitan areas across the country.

Freight by air plays an important role in metropolitan Chicago freight operations.  Shipping via air is considerably more expensive than other freight modes, but it delivers goods quicker and more reliably than other modes.  These high prices discourage all but the most valuable or time-sensitive goods -- such as fresh flowers, fashion garments, electronics, and pharmaceuticals -- from being shipped via airplane.  As a result, air freight carries a much higher value per ton than other modes.  It was estimated at more than $80,000 per ton in 2012, compared to about $1,300 per ton for truck and about $500 per ton for rail.

According to estimates from the federal Freight Analysis Framework (FAF) dataset, air cargo is also the fastest-growing freight mode in the region.  Total volumes shipped directly into the Chicago FAF region increased 13 percent between 2007 and 2012, and total volumes directly shipped out of the region increased 30 percent.  This compares to a 5-percent increase in inbound shipments and an 18-percent increase in outbound shipments for rail, and slight declines in both inbound and outbound shipments for truck.  The Chicago FAF region includes the CMAP seven-county region, along with neighboring Grundy, Kankakee, and DeKalb counties.  Note that estimates from the FAF focus on freight movements into and out of the region, excluding traffic that simply passes through the region or moves solely within the region.

The Chicago region's airports serve as an international gateway for goods traveling to and from other areas of the country, handling an estimated total of $71.4 billion of exports and imports in 2012.  Given the geographic location of our metropolitan area, air cargo is the only option for direct international shipping, adding an important component to the region's overall freight capabilities.  According to FAF estimates, exports and imports by air that originate or end in the Chicago region were worth an estimated $43.2 billion in 2012, with East Asia representing the region's main air trading partner.  Additionally, the region's airports are located near major highway and rail facilities, providing multimodal shipping opportunities for goods to reach their final destinations.

The list of the nation's top ten busiest airports handling air cargo includes locations that play special roles in freight and logistics.  Memphis, Louisville, Cincinnati, and Indianapolis are all major hubs for private courier services (FedEx, UPS, DHL and FedEx Express, respectively), each of which makes up the majority of its region's air cargo volumes.  Anchorage, meanwhile, is a common stopover point between Asia and North America.  These airports are not close peers with O'Hare because, rather than serving as major origins or destinations for freight, they are instead points where goods are sorted and redistributed.

Airports in Miami, Los Angeles, New York City, and Dallas-Fort Worth are closer peers to O'Hare, as these facilities handle a broad spectrum of cargo from domestic and international locations, supply major metropolitan areas as well as neighboring states, and serve a breadth of freight operators. 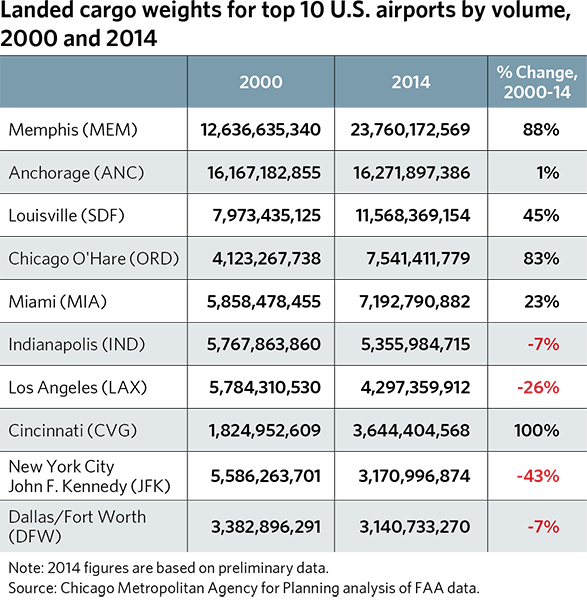 The region's growth in air cargo volume in recent years is especially strong when compared to these peer airports.   Between 2000 and 2008, O'Hare handled 4 to 5 billion pounds annually, but the 2008-09 economic downturn and closing of some cargo facilities for relocation caused its volumes to decline in 2009.  Since that year, the air cargo volumes at O'Hare have nearly doubled.  This dramatic rise is likely attributable to a combination of the opening of new cargo facilities at O'Hare as well as an improving economy.  In contrast, many of O'Hare's peers have either lost air cargo volumes since 2000 or recovered minimally from recessionary lows.  Further growth is expected at O'Hare in 2015, although some of this growth may be attributed to recent congestion due to labor issues at the nation's West Coast ports. 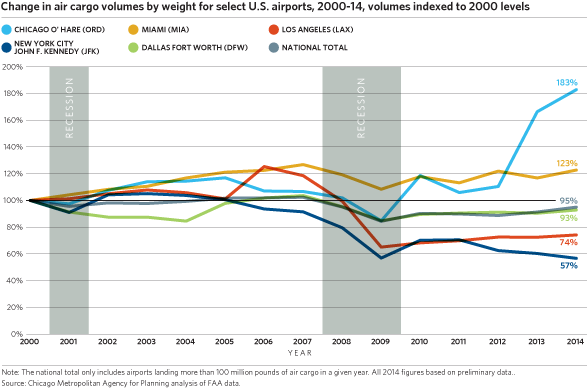 The O'Hare Modernization Program (OMP) broke ground in 2005 with goals to make the airport more efficient, decrease delays, and increase overall capacity.  The estimated $8 billion project is reorganizing the airport's runway layout by removing intersecting, diagonal runways in favor of several parallel, east-west landing strips.  Additionally, the OMP is expanding runways to accommodate newer, larger planes such as the Airbus A380.

The improvements at O'Hare have also included public investment to increase cargo operations.  The Chicago Department of Aviation is currently building a new cargo facility that will expand cargo capacity of the airport by more than 50 percent.  This facility will be constructed in three phases between 2013 and 2021, with the first phase opening by the end of 2015.  Officials at O'Hare are also developing plans to build a warehouse so perishable goods such as fresh fruits and flowers can be flown directly to the Chicago area and then quickly distributed across the country.  Many of these goods currently enter the U.S. through other airports, such as Miami, requiring longer truck trips to reach their destinations.

The OMP has also catalyzed private development at the airport.  For example, DHL opened a new facility in 2015 that added 491,000 square feet of cargo handling capacity to O'Hare.  The facility will also serve as a Foreign Trade Zone to aid in the continued growth of international trade at O'Hare.  United Airlines Cargo and FedEx Express facilities that were demolished to accommodate the reconfigured airfield layout have been rebuilt at greater capacities than the facilities they replaced.

Air cargo fills an important role in the metropolitan Chicago freight system, allowing the region to directly access international markets and support the movement of high-value goods.  Air cargo in the Chicago region has grown significantly in recent years, outpacing peer regions, and investments underway are poised to support future growth in this mode.  This capacity may help the region accommodate the predicted 190-percent increase in inbound air cargo volumes and 300-percent increase in outbound volumes by 2040.

Previous CMAP analysis has identified the importance of freight to the regional economy. Freight serves as a key job creator, especially in the communities directly in and around the O'Hare subregion.  Convenient access to the airport is a major economic advantage for numerous manufacturing and freight-related firms.  CMAP has previously highlighted the importance of the region's freight and manufacturing clusters, as well as the advantages created by the nexus between the two.

GO TO 2040 calls on the region to create a more efficient freight network, with a focus on road and rail infrastructure.  But, the region's air freight facilities are positioned to become increasingly important as global trade, intermodal transportation, and just-in-time delivery logistics continue to shape goods movement.  Promoting strong freight connections with the region's air facilities can supplement a more efficient and complete freight network, benefitting the movement of goods and people as well as the regional economy.