GO TO 2040 recommends increasing investment in public transit as well as encouraging more walking and biking trips as these modes of travel can alleviate congestion and are less environmentally damaging. Transit helps improve our economy and quality of life, giving people more choices for getting around. A diversified mode share can also increase regional mobility so that driving becomes a choice rather than a necessity.

A shift in travel behavior in the region

After several decades of consistent growth in car ownership, car use, and solo occupancy vehicle (SOV) commuting, travel behavior has shifted significantly since 2000. Through the 1980s and 1990s, the share of commuters driving alone to work steadily increased until these trips represented 70 percent of total work trips. Since 2000, though, the share of SOV trips has stopped increasing. During the same period, the composition of the remaining 30 percent of commute mode share has diversified. 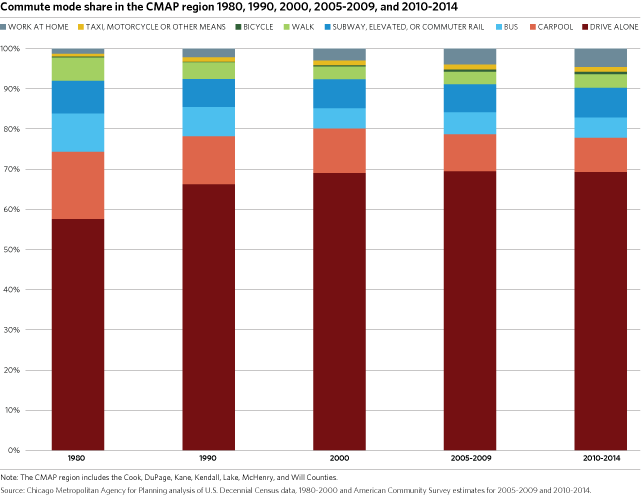 Commuters in the Chicago region appear to be shifting away from carpooling in favor of non-automotive alternatives. A notable trend among these alternatives is the increase of the non-commute category, or telecommuters. This category of commuter has steadily increased since 1980 and comprises 4.5 percent of the region's workers in the 2010-2014 ACS 5-year estimates. Although bicycling represents a small component of overall mode share, this mode saw the greatest increase, more than doubling between 2000 and 2014.

Transit mode share has also changed. The percent of the region's residents commuting by rail has remained steady since the 1990s. However, bus ridership has declined. The decrease occurred from 1980-2000, with mode share near 5 percent since 2000.

Commute mode share differs throughout the region, with the exception of a broad dependence on SOV commuting. The City of Chicago's high population density, status as the region's employment center, and extensive public transportation network make it an outlier, with much higher rates of public transit use, bicycling, and walking than the rest of the seven-county region. In the City of Chicago, only half of commuters drove alone to work in the 2010-2014 dataset with commuting by bus as the next most common mode. 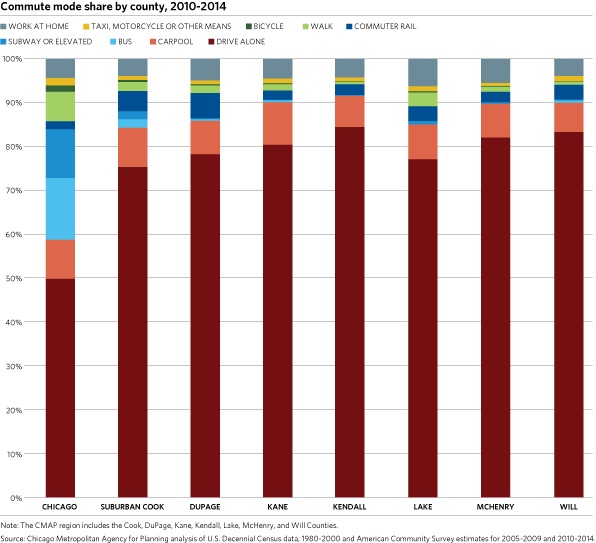 For the suburban areas of the region, carpooling is the second most predominant commute mode, with commuter rail transit and working from home alternating for third and fourth. Commuter rail is the prevailing transit mode outside of the City of Chicago, particularly in townships near Metra rail lines. Mode share for all types of rail transit are highest in the City of Chicago, Suburban Cook, and DuPage County, at 12.9 percent, 6.4 percent, and 6 percent, respectively. Lake County has a lower rate of SOV commuting than most other areas of the region, driven by a notably high percent of commuters who walk to work, as well as the largest percent of residents working from home. Lake County also experienced the largest percentage point increase in residents working from home between 2000 and 2010-2014. 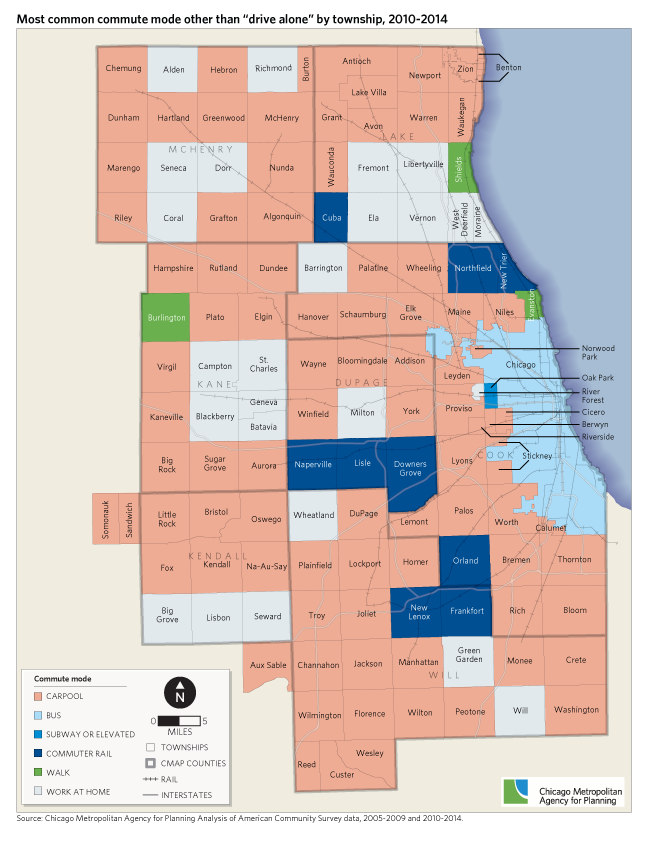 The effect of worker earnings

Commute patterns also vary by worker earnings. Trends in SOV commuting are particularly striking. While the majority of commuters across all wage levels drive alone to work, the rate of SOV commuting rises with wages, levels off, and decreases for the highest earners. This pattern is consistent across the region's seven counties. 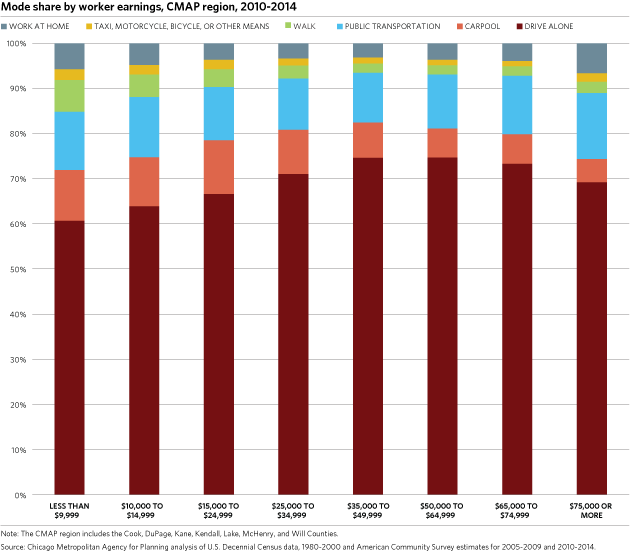 Mode choice depends on variables such as travel time, cost, and level of service. Income plays a role as well, with factors such as vehicle availability or the desire for a shorter commute somewhat driven by worker earnings. Regional mode share may be attributed these factors plus issues of regional accessibility and connectivity, often influenced by land use. The balance between densities of population and employment  in conjunction with access to transportation infrastructure and ease of travel may play a larger role in explaining regional mode share trends. Other trends, such as the recent increase in commuting via bicycling and working from home, may be attributed to lifestyle choices and increased infrastructure for these modes along with other factors.

As indicated in GO TO 2040, investment in regional mobility supports a strong quality of life and long-term economic productivity. Diversifying mode share in the region by expanding transportation options can increase the efficient movement of goods and people, offering choices to the region's residents and reducing the negative impacts of congestion. It may serve as an investment in human capital, and attracting skilled workers, who value a well-functioning transportation network.