This measure reports the proportion of residents in the Chicago region who are age 25 and older holding an associate’s degree or higher. Higher levels of educational attainment create benefits for both individuals and regional economies. As residents receive additional postsecondary education, they can generally expect increased median earnings and a decreased likelihood of joblessness. On a regional scale, these trends translate to lower unemployment rates and greater economic output. The inclusion of associate’s degrees in this measure helps to highlight the important role community colleges play in improving education and workforce development, and reflects the significance of “middle-skill” jobs in our regional economy.

In 2015, approximately 44 percent of the regional population age 25 and over held an associate’s degree or higher; this exceeds the national average of 39 percent. Data from the ACS show that higher education levels are generally on the rise, in the region and nationwide. Between 2009-14, the proportion of the region’s residents holding an associate’s degree or higher has increased by an average 0.59 percentage points per year, ahead of the national average of 0.51 percentage points per year. The goal is to maintain the current growth rate in educational attainment as it relates to higher education, providing the basis for the 2025 and 2050 targets.

Indicator
Graphical representation of data follows. You can skip to data download
Percent of population (age 25 and over) with an associate's degree or higher
Key
Source
CMAP analysis of data from the U.S. Census Bureau’s American Community Survey (ACS).
See Indicators Appendix for methodology

As a kindred indicator, ON TO 2050 will also track the proportion of residents in the Chicago region and peer metropolitan areas who are age 25 and older holding an associate’s degree or higher by race and ethnicity. Disparate outcomes exist across races and ethnicities in educational attainment. Black and Hispanic residents have educational attainment rates lower than the regional average and significantly lower than Asian and white residents.

Indicator
Graphical representation of data follows. You can skip to data download
Share of population (age 25 and over) with an associate's degree or higher, by race and ethnicity
Key
Source
American Community Survey data, one year estimates, 2005-16.
See Indicators Appendix for methodology 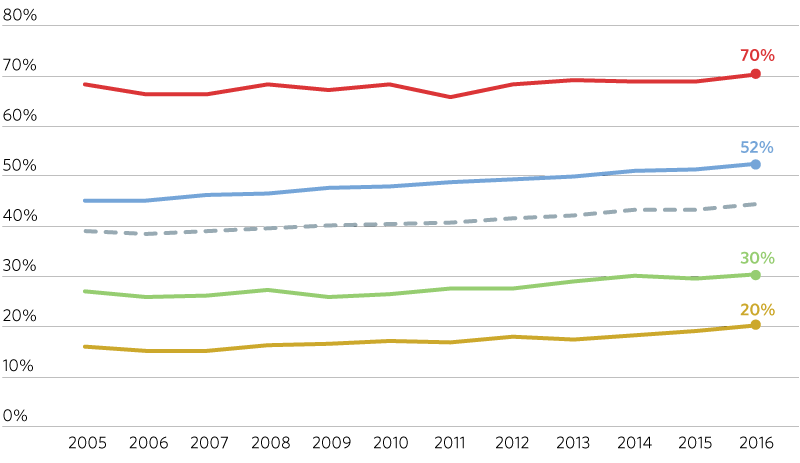