CMAP has issued a report, Examination of Local Economic Development Incentives in Northeastern Illinois, to analyze how local governments use incentives to attract or retain businesses such as retail stores, auto dealerships, corporate offices, and manufacturing or warehousing industries or encourage the redevelopment of underutilized sites and the construction of affordable housing and mixed-use development. Although 202 out of 284 municipalities in northeastern Illinois are using economic development incentives, their impact is not widely understood.  To determine their prevalence, structure, and goals -- along with their effects on development in the region -- CMAP studied the following incentives:

Economic development incentives are among the issues CMAP has been studying as recommended in 2012 by a regional tax policy task force, which itself was formed as a recommendation of the GO TO 2040 comprehensive plan.

Read more about the report in a CMAP Policy Update. 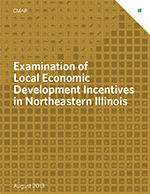