Like the expressway system, much of the rail network will need to be rebuilt during the planning period. Given significant financial constraints and the needs of the existing system, ON TO 2050 limits expansion of the system, instead emphasizing improvements that enable the current system to carry more passengers more quickly and reliably, particularly on lines that have capacity constraints. In some cases, this entails also expanding overall capital by purchasing more rolling stock (trains and buses) to allow for increased service. Faster, more comfortable, higher frequency, and more reliable transit service is a key to increasing transit ridership. The Make transit more competitive recommendation outlines the many other policy and land use planning actions that need to be taken to make these investments successful and lay the groundwork for additional future transit enhancements. Both rail and bus improvements are recommended in ON TO 2050.

The following are the constrained regionally significant transit projects

Costs displayed below are the total capital costs for the projects, including both reconstruction and new capacity, in 2018 dollars. Fiscal constraint is based on year of expenditure new capacity costs and incremental operating costs.

This project would reconstruct the Forest Park Branch of the Blue Line, which is in a deteriorated condition. It includes full modernization of existing infrastructure and upgrades for future capacity increases. The project will reconstruct and reconfigure the Forest Park Terminal and Yard. The CTA’s Blue Line Vision study was conducted in coordination with IDOT’s planning process for the Eisenhower reconstruction (RSP 30), and CTA and IDOT should continue to coordinate these closely related projects throughout their reconstruction. This project would have a high economic impact for the investment required as well as benefits to EDAs. 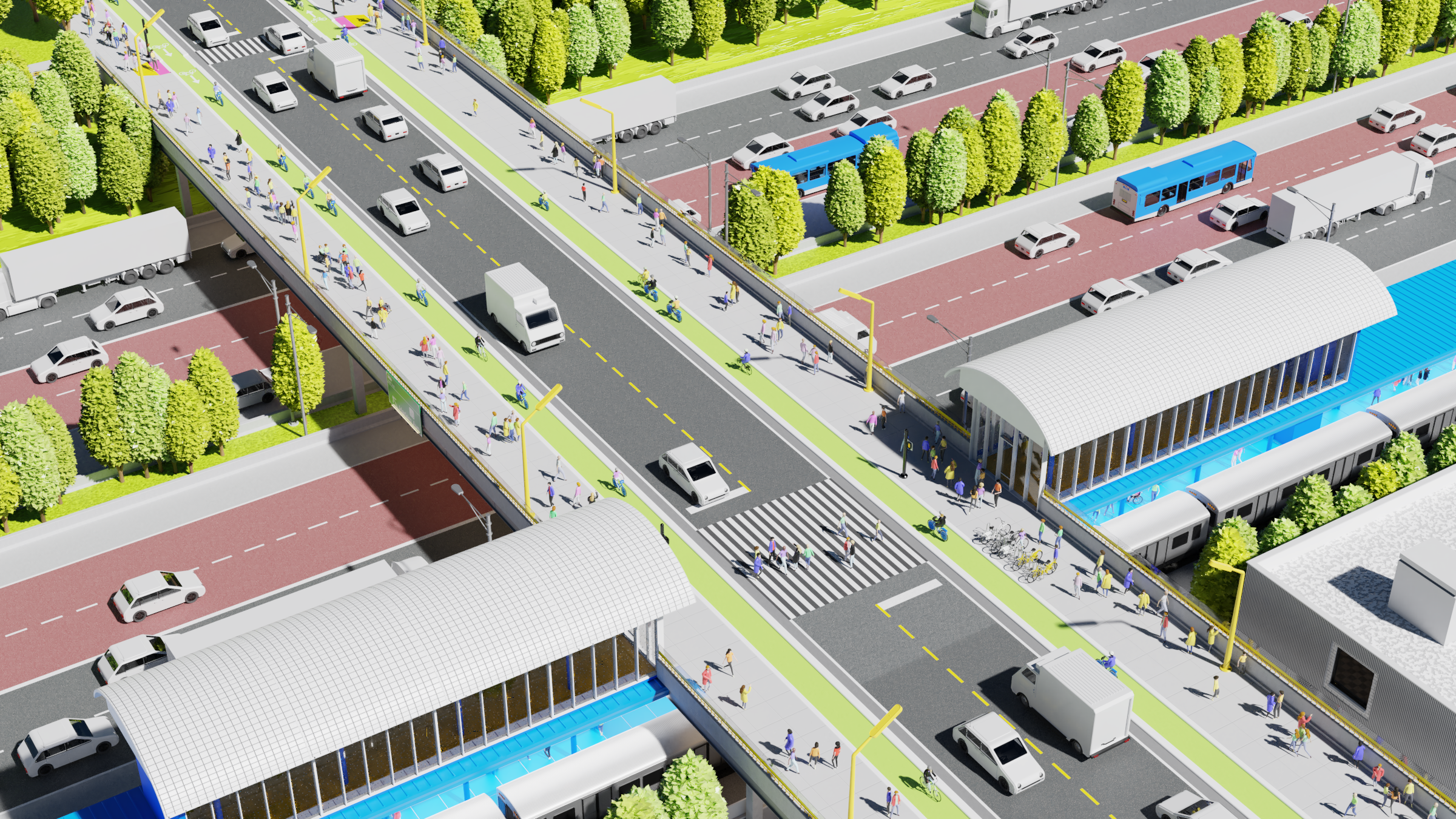 This project would provide for capacity increases on the Blue Line, based on significant projected ridership growth on the O’Hare branch. This project would include improvements to the traction power system such as wayside energy storage systems, third rail replacement, and/or new infill substations or auxiliary negative rail. It may also include a turn-back track, yard and station improvements, and station expansion. A load flow study is underway to better understand needs. This project supports the O’Hare International Airport expansion and access for tourists and other visitors to the region. There may be some overlap in geographic area between this project and the CTA Blue Line Forest Park Reconstruction (RSP 93) but for the purposes of this plan, project elements have not been double counted.

The Red/Purple Modernization project envisions a modernization of the 100-year old “L” lines serving the North Side of Chicago and is a significant reinvestment in existing communities. As CTA’s most capacity-constrained line, the project would include a bypass separating the Red Line and Purple Line tracks from the Brown Line north of the Belmont Station to allow higher passenger capacity. The project also reconstructs deteriorated rail infrastructure and stations between the Lawrence and Bryn Mawr stations and replaces the signal system along the corridor. It has committed funding under the federal New Starts program as well as under TFIA, and is currently beginning pre-construction work.

Future phases of the Red/Purple Modernization project will continue to address deteriorated structure, track, and station conditions from the Belmont to Linden stops as well as allow for additional service. Modeling suggests very high benefits to additional service on the line made possible by investments in capacity, with the largest expected economic impacts of any of the projects evaluated. Reconstruction of viaducts also offers the potential to open neighborhood thoroughfares. Because of the need to reconstruct so much of the existing facility, the project is costly. It is expected that value capture through TFIA would also be able to provide a contribution to the overall cost.

Residents of the South Side of Chicago and the near south suburbs suffer long transit commute times. By extending the Red Line south to 130th Street from its current terminus at 95th Street, the area it serves would see improved access to jobs, particularly by easy transfers to CTA rail downtown, and reduced travel times. The project is relatively cost-effective at increasing ridership and has a high benefit to EDAs. Because it will also allow for a larger yard, it will help address capacity constraints on the whole line. The large park-and-ride lot to be constructed at the 130th Street station will provide new commute options for southern Cook County as well. Value capture through the TFIA legislation should be used to help fund the project.

This group of projects includes a significant investment in speeding bus travel within the city of Chicago. Although CDOT and CTA have both investigated numerous routes, a final set of projects has not been identified. More planning must occur to identify the highest ridership routes on which speed and reliability improvements would be most beneficial. The program includes Ashland Avenue BRT (RSP 106), a project with strong performance but on which progress has stalled. It is the most cost-effective project modeled for ON TO 2050. The program also includes the South Halsted BRT route (RSP 108), a collaboration between CTA and Pace, which would have significant benefits to EDAs. Finally, the currently identified list includes the South Lakefront-Museum Campus Access Improvement (RSP 104), which would address the difficulty of reaching the museum campus by transit and help promote tourism.

The BNSF Improvements project benefits new and existing riders on Metra’s highest ridership line and is the second most cost-effective of all the projects studied. This project would make track, signal, and other improvements to the BNSF Line to support growth in ridership and upgrades to the capacity of the line. Improvements would allow for additional express service to the highest ridership stations on the line alleviating crowding. A new station at Eola Road in Naperville could provide additional commuter options and relief for congested stations.

This project would make track, signal, and other improvements to the Milwaukee District West Line to support increased capacity. A storage yard and maintenance facility expansion will enable additional peak period express and reverse commute service. Adding a fourth track from the A-5 junction to Randolph Street in Chicago will also benefit MD-N and NCS. The replacement of the Fox River Bridge (Z-100) is currently underway, funded in part by a TIGER grant. A second track across the river will remove a bottleneck that has restricted capacity.

The UP North has the highest percentage of trains over capacity on the Metra system and has major state-of-good-repair problems. The UP North Improvements will improve the capacity and reliability of the line through installation of crossovers and track improvements, and a new outlying coach yard will allow for more efficient servicing of equipment and accommodate expansion of service. Reconstruction of the bridges along the line is a major cost item in the project and will provide significant state-of-good-repair improvements. In addition to planned upgrades to existing stations, a new station at Peterson and Ridge avenues is funded.

The UP Northwest is one of Metra’s most capacity-constrained lines, with inadequate yard space that forces ad hoc storage of trains on sidings along the route. A 1.6-mile extension to Johnsburg from McHenry will also allow space for new yards. Other infrastructure upgrades include improvements to the signal system, crossovers, and track improvements to increase capacity and reliability. Two additional stations will be added to the line at Prairie Grove and Ridgefield. These combined improvements are estimated to increase ridership considerably on the line. Planning for transit-supportive development at new stations and for feeder bus service will increase access along the line.

The UP West Improvements will provide track, signal, safety, and infrastructure improvements to increase passenger service and coordinate with freight traffic. Specifically, a third track will be added to an existing double-track portion of the line east of Elmhurst. These improvements will enable the UP West to better serve as an alternative to the BNSF line and also to operate more effectively in coordination with freight rail movements. Part of the project involves upgrades to signal systems, crossovers, pedestrian safety improvements, and new triple track.

Metra’s improvements to the Rock Island District (RID) Line will enhance coordination between freight and Metra trains as well as allow for eventual connection of the SouthWest Service (SWS) with LaSalle Street Station. This project will improve rail freight movement through the region, provide capacity for additional express service, reduce congestion, and improve access at Union Station. Improvements include adding a third track between Gresham Junction and a point north of 16th Street Junction, new signals, and an expanded and modernized 47th Street Yard, which will have major efficiency benefits to Metra operations. CREATE Project P1, a rail flyover at the Englewood interlocking, is also part of this project and is complete.

This is one of the last major CREATE projects. Six major railroads -- two passenger and four freight -- pass through the 75th Street corridor on Chicago’s South Side, crossing each other and local roads and creating intense train and road traffic back-ups. In addition, the current track layout routes Metra’s Southwest Service to the congested Union Station. The proposed improvements include two rail-to-rail grade separations to untangle the railroad tracks, including a flyover to reroute the Metra Southwest Service to the less congested LaSalle Street Station. This, combined with additional Southwest Service track and less freight interference, will facilitate additional trains and other service improvements for the Southwest Service. The engineering for this project is advanced; final design is required. It has strong potential as a public-private project among the State of Illinois, City of Chicago, Cook County, Metra, and private railroads.

The Pace Pulse program of projects would speed bus service on Pace’s most heavily used routes by implementing TSP, stations with enhanced amenities, and other improvements. Modeling suggests that the project would be very cost-effective and would have significant average commute time savings for a bus project. Only the near-term projects in the full 24-route program are considered constrained in ON TO 2050. 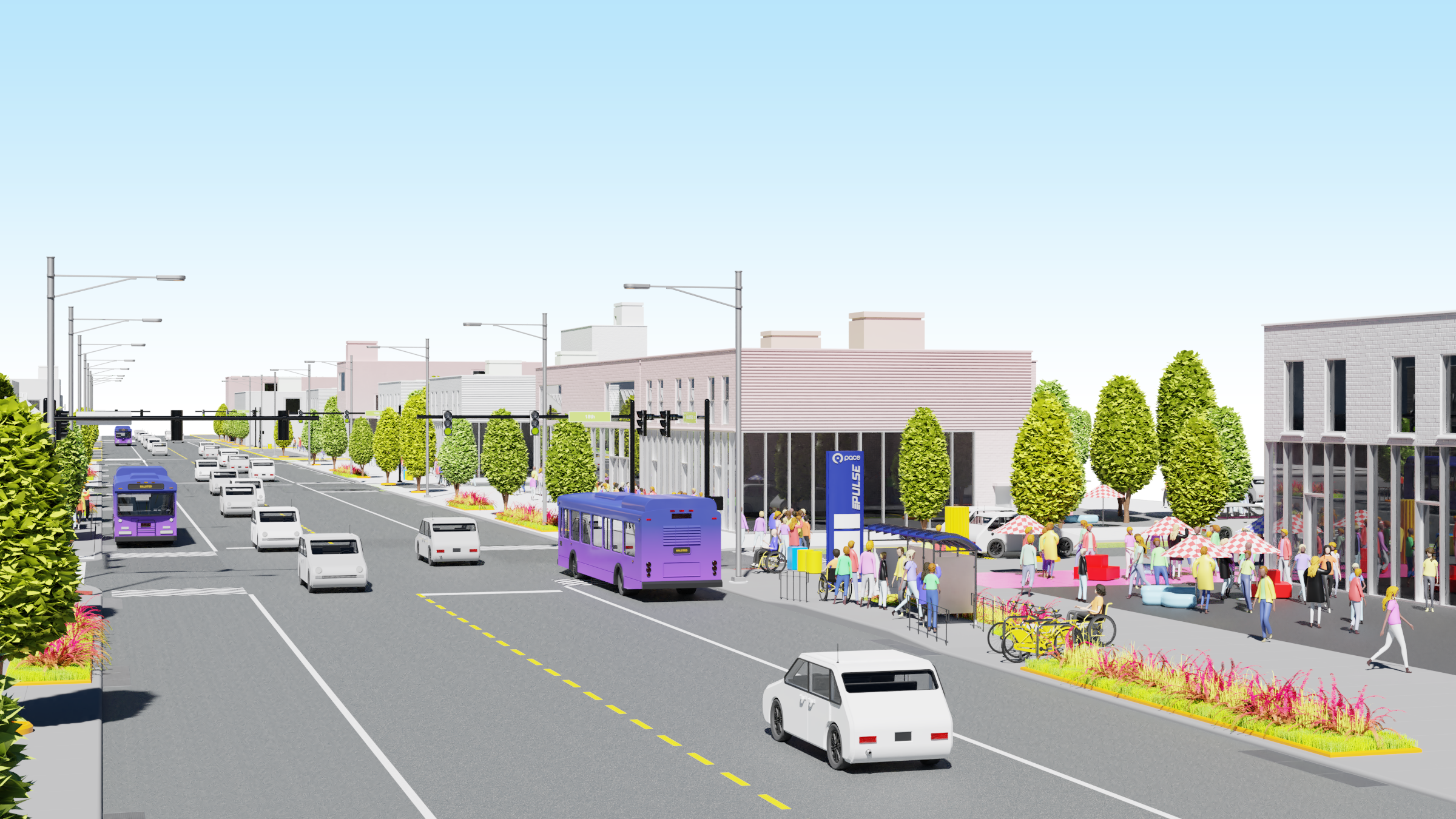 The West Loop Transportation Center is envisioned as a new transportation hub that would reconfigure Chicago Union Station and ultimately lead to greatly improved connections between rapid transit, bus, commuter rail, and intercity rail services. Amtrak is the owner and operator of Union Station, and this project will also promote access for tourism, as well as intercity bus and rail connections. Only Phase 1 is on the fiscally constrained project list; it will increase capacity within the existing footprint of Union Station by creating new platforms and tracks and by repurposing currently inactive tracks and platforms formerly used for mail handling. It will also expand platforms used by Metra commuters, reconfigure the station’s internal spaces to increase passenger capacity, and provide a weather-protected pedestrian connection to the Blue Line. Continued attention to intercity bus accommodations is needed in Phase 1. It is expected that value capture through TFIA would also be able to provide a contribution to the overall cost. Phase 2 is envisioned as creating a new subway along Clinton to connect from Union Station to the Blue Line; this element is unconstrained.